Berthold Bouman's Grand Prix Journal All the Formula One news

Mercedes dominated the second free practice session for the Monaco Grand Prix this afternoon, as Nico Rosberg and Lewis Hamilton took first and second place. Rosberg lapped the Monte Carlo street circuit in 1m14.759s on the super soft tyres, he was 1.436s faster than this morning.

Kimi Raikkonen and Romain Grosjean landed sixth and seventh spot, but Grosjean crashed his Lotus into the wall at Saint Devote after he had run wide, the red flag came out as track marshals used the opportunity to inspect a loose kerb at the swimming pool before the session was restarted. 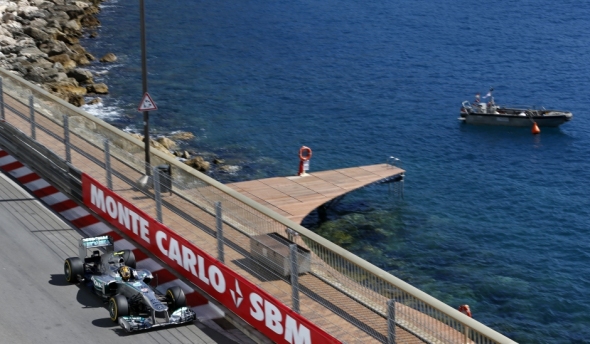 Jenson Button was again faster than his team colleague Sergio Perez, he was eighth while Perez was 12th. Paul di Resta completed the top ten, but he was closely followed by Adrian Sutil in the second Force India, the German was 11th fastest this afternoon.

Nico Hulkenberg was again quick in the Sauber, he took 13th place, while Esteban Gutierrez was 15th, just 0,112s slower than Hulkenberg. Pastor Maldonado was not as quick as he had been this morning, he took 14th spot for Williams while Valtteri Bottas was 18th. 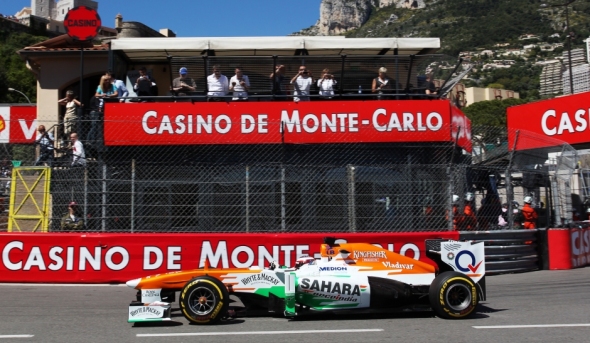 Toro Rosso drivers Daniel Ricciardo and Jean-Eric Vergne were 16th and 17th respectively, and at the bottom of the list are the usual suspects, as usual Marussia driver Jules Bianchi was faster than Max Chilton, while tis time Charles Pic outpaced his Dutch team colleague, he was 19th while Giedo van der Garde was 22nd and last.

Results of the second free practice session can be found here.

This entry was posted on May 23, 2013 by Berthold Bouman. It was filed under Featured, Formula One and was tagged with Alonso, Ferrari, Hamilton, Mercedes, Monaco GP, Monte Carlo, Rosberg.